On Wednesday, December 17 we had a very special guest—Rachel Kros from USTA/ MAS! Rachel is Senior Manager of Youth Competition. Rachel oversees all junior tennis tournaments, and she came to Aspen Hill Club to educate our families on changes to the way USTA junior tennis tournaments will work! Below I’ve outlined a couple of important changes that all of our families should be aware of: 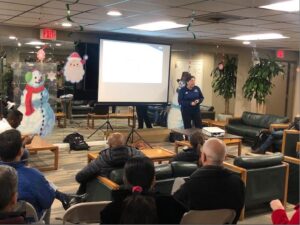 ONE Nationwide Structure of Tournaments. The 17 sectional structures and one national structure will be replaced with ONE nationwide structure of junior tournaments. The structure will consist of seven levels of ranking tournaments, with the lowest level of intermediate tournament classified as a Level 7 and USTA National Championships classified as Level 1. For entry-level to intermediate players of all ages, a non-ranking series of events called the Net Generation Circuit will focus on age-appropriate competition, development and fun.

ONE Standings List. At least monthly, the USTA will continue to publish National Standings Lists (NSLs), using the same Best of 6 singles and Best of 6 doubles results system, with 15% of a player’s doubles results counting toward a player’s standing. Points will count up and count down as they have in the past. These lists will be filtered by section or district when they are used for selection into closed tournaments and team competitions.

EVERYTHING Counts. While sections will continue to hold two Closed Level 3s and four Closed 4s, and in some cases Closed Level 5s, all other tournaments sanctioned by the sections will be open to all players and all results will count in the ranking system. This also permits sections to hold Open Level 4s. This means that, for example, if you are vacationing out of section and play a tournament, it will count. It also allows players who live near section borders to play across section lines and have their results count.

Championships, but these lists will all have the same criteria and will be published on a monthly basis so players better understand their chances of making Nationals. The criteria provides an incentive for players to compete in-section as follows:

It All Starts in 2021. All of the changes will take effect in January 2021. In the coming months, be on the lookout for webinars and other educational materials that will take a deeper dive into the details of the new structure.