I’ve been a life-long swimmer and love the Aquatics Program at Aspen Hill Club since 2005. It is the main reason I joined Aspen Hill Club. Once I had a child, Alexander Hilmer, one of the first things I was looking forward to was having him learn how to swim. When he was five months old we went on a vacation in January, 2019 to Florida and I immediately knew he wanted to swim, since he only spent about 2 minutes in the infant shaded floating inner-tube before he got bored and wanted to get out and swim by his own.  I held him by his underarms and he was kicking and paddling like a storm!

Soon after that experience we started lessons with James Morrison (AKA “Mr. James”) and he took off. After about three lessons both he had learned from James a lot of the how to swim basics, and was doing really well in the water.  By Spring 2019 he became a fixture at the pool, as I spent at least an hour every day swimming with him (and thank you to the wonderful Childminding service at the club, I got my swimming in too after he was done!).  He started with the “puddle jumper” recommended by James, and first put his face in the pool to swim by himself.  With the help of James, I then started to “dunk” him a bit so his face was underwater and he started feeling comfortable with it.  It has been shown that children under 12 months have the natural ability to hold their breath when underwater, so I was determined to get him comfortable with having his face underwater by this point. Summer came around and both my Mother-in-law and I were taking him to our community pool and the Aspen Hill pool, so he was swimming twice a day, and graduated from the “puddle jumpers” to a pool noodle, and started needing swim goggles since he had his face in the water more often than not! By the Fall of 2019 he was independent of the pool noodles (he actually threw them off and started swimming by himself) and started grabbing for the toys on the bench sticking his face underwater by himself – and soon after he was able to grab diving toys from the bottom of the pool with a little push from his Dad, and again with the supervision, encouragement, and help from James. Now, at 19 months, he is starting to lift his head by himself and breathe and basically swim to the wall and bench all by himself.

It did take a lot of work – going swimming with him every day for at least an hour – when he’s healthy – but the great set-up at the pool with the Aspen Hill Club community, lifeguards and staff, especially James Morrison and Terry Kominiski, I think my son has a great future in swimming! Of course, as a Father, I have enjoyed every minute in the water with my son, seeing him learn how to swim, and being so proud of his ability, with the enormous help of the Aspen Hill Club community! 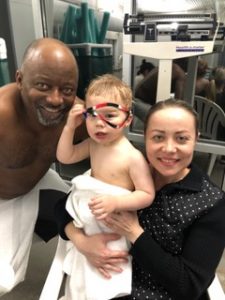