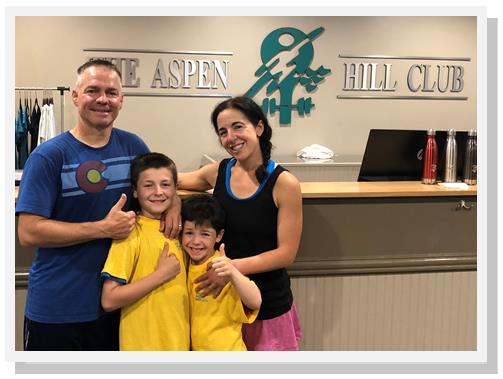 Cecelia and Bob Peterson stay active! They joined The Aspen Hill Club last September and haven’t looked back since. They originally joined the club when Assistant Junior Tennis Director Julien DeLaine called them to get their oldest son, Zane, into our tennis classes. It didn’t take Cecilia long to see how many benefits The Club offered for her family, so they did end up joining as a family!

Bob and Cecelia have enjoyed the benefits of an active lifestyle, in fact, they met while rock climbing in Colorado! Bob was living in Colorado as he was stationed there with the U.S. Air Force, and Cecelia (originally from Philadelphia) was attending graduate school in Colorado. Keeping active is important to the Peterson’s, and they are doing a great job of having the kids grow up with the same priorities.

The youngest member of the Peterson’s, 6 year old Gustave, enjoys his time in the AHC pool and hanging out in childminding while his parents are staying busy. He is very much looking forward to beginning tennis classes this coming Fall! 10 year old Zane enjoys his classes in the Aspen Hill Academy tennis program as well match play. Recently Zane has joined a USTA team and is thriving in competitive match play! Coach Julian describes Zane as “A real competitor, we can always count on Zane to keep fighting until the very end. I can’t wait to watch Zane grow as a tennis player!”

Cecelia and Bob both stay active with The Club’s tennis programs. Cecelia and Bob come to AHC between 3-4 times a week, and you can often find them on the courts! Cecelia has recently participated in our Thursday night Hot Shot tennis class, Sunday Singles clinic, Hit and Runs, and just about any social tennis event including Doubles Frenzy on Friday nights. “Bob and I have met so many people, it’s been fun to play together!” she explains. Having met many people through the club programs and events, they have a busy schedule of setting up their own matches! In addition to joining Cecelia on the courts, you can also find Bob hitting the racquetball courts.

Bob has really enjoyed the physical and social benefits of tennis, and is doing what he can to share this experience with those close to him. Bob currently oversees the Junior ROTC program at Bladensburg High School, and he has brought tennis to his students as part of their physical and wellness training (PT) time.  “I brought in a few tennis rackets and a bag full of orange dot balls.  We started with the basics; grip, hitting against the wall and then hitting the ball over the net.  They picked things up pretty fast and by the end of class were trying to see how many back and forth they could get in during doubles.  After the first “tennis class” several students told me I shouldn’t have taken them out on the courts because they will want to do this every “PT” day. I told them, “That’s fine with me!” Since that class, students have visited thrift stores and can be seen playing tennis on their own!

Cecelia, Bob, Zane, and Gus – “Thank you” so much for adding so much to our community at The Aspen Hill Club! You make the club a happier place every time you step inside and we are so glad that you are part of our family.