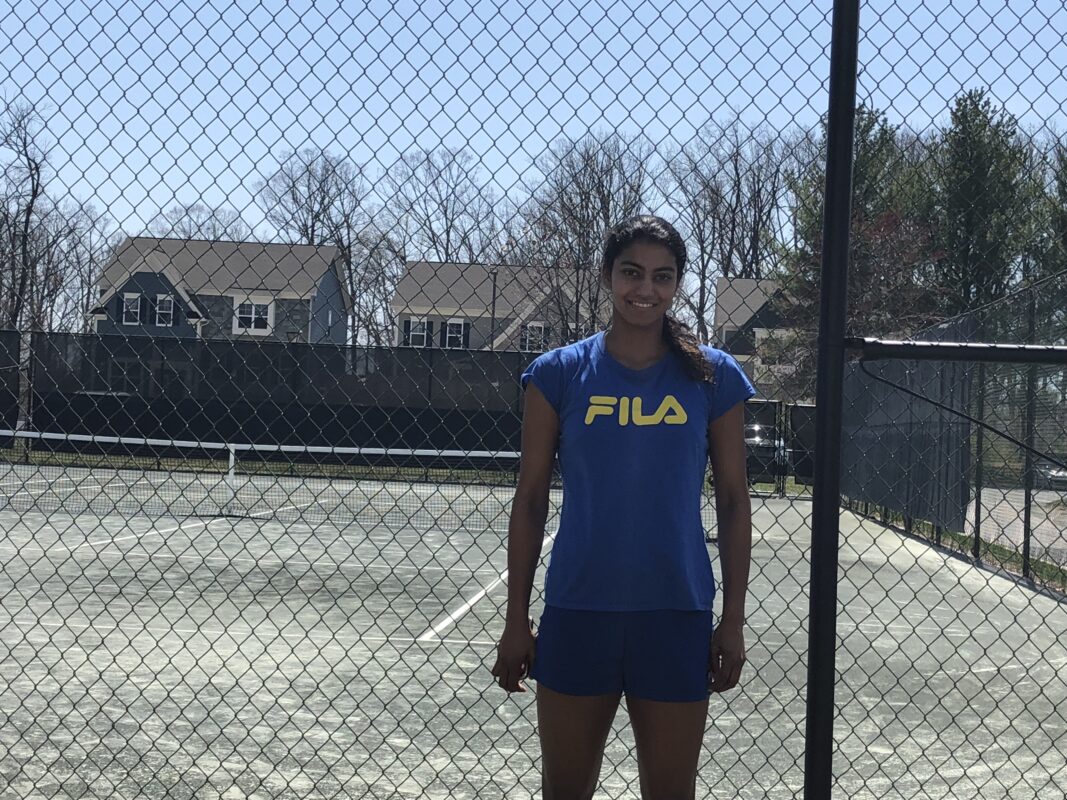 You have probably seen Raveena at the Club — she is with us nearly every day! If you have been lucky enough to watch her tennis practice sessions while you sit in the Club lobby, you will have noticed that she is REALLY, REALLY GOOD! In fact you may have thought, “She looks like a pro!” If you did in fact have that thought, you were right!

Raveena Kinsley is a professional tennis player! The Baltimore native started play tennis at 7 years old, when her father started play tennis with her. He noticed that she had very strong technical mechanics, so he signed her up for tennis lessons when she was 8 years old. Fast forwards to  Raveena being 17 years old—and she is a GRAND SLAM PLAYER! She has played in all four of the tennis Majors (US Open, Wimbledon, French Open, & the Australian Open) and been ranked as high as #22 in the World ITF Jr.  rankings!

Since turning professional, Raveena has played in some of the world’s top events including Indian Wells, Volvo Women’s Open, and DC’s own Citi Open. Since achieving her career high ranking of #285 in the world, Raveena has unfortunately been battling injuries.

Recently, Raveena took 3 months off from tennis to recover from a foot injury and did not pick up a racket until this passed February. Since returning to the court, she is now playing at least 5 days a week at Aspen Hill and making use of our Fitness Center. On the court, she has been playing points and drilling with AHC Senior, Pro Michael Gee. Her time with Michael is helping her prepare for a return to WTA Tour tournament tennis—aiming for this coming May! She enjoys how positive the staff of the Club is, and if she had a great workout—she treats herself  to the delicious tuna sandwiches served by Kristen at the Aspen Hill Café.

Raveena is looking forward to hitting the WTA Tour clay court season in Europe, and can’t wait to get back on the court competing. Raveena feels that the  time off from injury helped give her a new perspective “I’m really lucky to be playing tennis, I like being on the court and enjoy being positive.”

In Europe, Raveena is going to start out playing $15,000 and $25,000 prize money tournaments. As an example, a #1 seed at a $25k WTA Tour event might be ranked #100 in the world. With solid results at these tournaments over the summer, Raveena will be playing qualifiers at tournaments such as Citi Open. And from there—we will be watching her play on stadium court!

Raveena, it is so great to see you working hard at the Club every day. Your hard work is motivating to our members, adults and juniors alike. Good luck on the pro tour, and you have about 4,000 of your fellow members rooting you on! We can’t wait to follow your results!