Marlie and Andy had always enjoyed being a member of a gym, and when they moved to a new area in 2012 they had nowhere to go. With some research, Marlie uncovered a hidden gem! She knew she needed somewhere that she could go to work out, but what she found was something much more.

Marlie explains part of her search process, “I didn’t know The Club was there and didn’t know anyone that was a member…I worked from home and needed somewhere that would watc 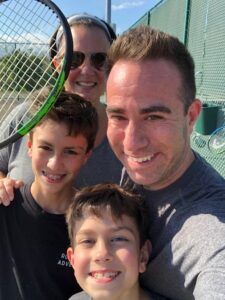 h the kids when I was working out.” Eric gave Marlie a fantastic tour during her first visit, Marlie was so impressed with what she had unearthed that she joined that very night.

When Marlie first joined the Club, Matt was 2 years old while Ben was 5. The boys started out in Child Minding, and that first summer they entered Mindy’s Kids Kamp. The kids loved going to Aspen Hill because they did so many fun activities. The family were regular participants in Aspen Hill Club’s kids’ activities such as our annual Pumpkin Carvin’ Party, Trick-or-Treat Parade and our annual Gingerbread House Party.

During summertime Kids Kamp one of the daily activities is playing 30-minutes of tennis. The kids continued going to Kids Kamp for four years and continued playing tennis, but enjoyed the other activities more! It wasn’t until this past Summer that Matt and Ben focused on tennis camp. Matt and Ben both participated in full-day Champion’s Tennis Camp and their tennis games flourished! Both participated in their first competitions—being members of Aspen Hill Club’s Championship-winning Junior Interclub Team and even entering their first sanctioned USTA tennis tournaments.

Marlie stays busy while the kids are playing tennis. She regularly has personal training sessions with Heather, which she enjoys even though Marlie says (about Heather) “She kicks my butt! But it’s great.” Marlie also enjoys swimming workouts in the pool and has been attended Jeff Klein’s Saturday morning Beginner Tennis Drills.

Andy grew up playing tennis for fun and envisioned playing tennis at Aspen Hill Club when they became members. He didn’t realize that the boys would be so into playing, but he’s happy that tennis is such a great family bonding time. The family often plays doubles, in fact, they are in the process of upgrading their membership to “Presidential” so they can move their weekly neighborhood tennis games indoors during the winter season. In addition to tennis, Andy enjoys playing racquetball with friends at the Club.

The Brill family stays very active with many activities at the Club, but what really makes the space special to Marlie is the relationships that she has built, “I like that the staff have been there, they know my kids and look out for them. Heather let me know that Ben hit a winning forehand in a tennis match!” The kids know that they have family friends in the staff too, in fact, the cool lifeguard (James) helped him pull out his first tooth!”

The Brill family has so many memories at Aspen Hill Club and is a great motivation for all families and individuals to be active. “Put yourself out there at least once, everyone is so nice!… I joined a tennis class to learn tennis, not to meet friends. But now have new friends!” explains Marlie.

Marlie, Andy, Ben, and Matt—THANK YOU for adding so much to our community at the Aspen Hill Club. Every time you “check-in” at the front desk, the Club is a happier place!