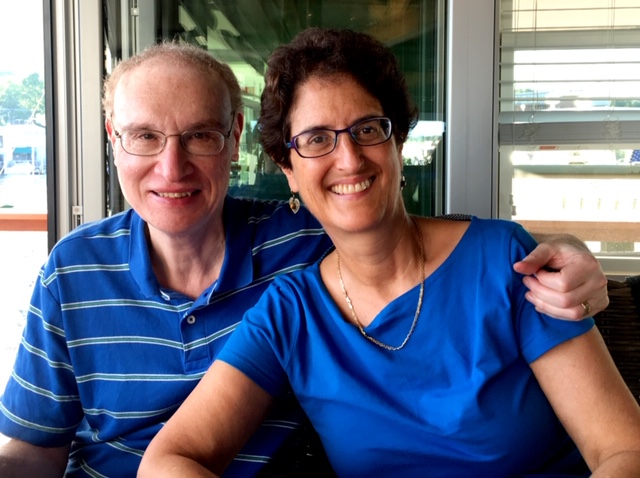 We have a very special “Member Spotlight” for the month of February. This story begins 30 years ago at the Aspen Hill Club! I was re-introduced to Felicia and Dan during their New Member Tennis Evaluation, at which point they let me know that they had indeed been members of The Club before, and were itching to get back into tennis. That brief summary of their story does very little to tell their tale!

Going back to 1987, Felicia loved tennis! She wanted to play more, so she picked up the phone and called The Club. She enjoyed herself in a group class—taught by my mom (Vicki Datlow), and learned there was a tennis social going on right after the class she had attended. She did in fact stay for the social, and started chatting with a man while in line for the food buffet. Dan and Felicia agreed to play tennis the next week!

Felicia and Dan attended tennis class the next week, but Felicia needed to know more about this guy. In 1987,  she didn’t Google his name—but she did make a test of her own for him, “ I needed to see what he was made of” explains Felicia. She had him ride the bike with her to see if he could keep up. Dan vividly remembers this pop-quiz “I knew I was either going to be in the best shape of my life, or dead!” Luckily, Dan did in fact pass this test!

In the next couple years, Felicia and Dan kept up with their tennis and fitness at The Club. Dan participated in tennis leagues at The Club. Felicia joined a 3.0 USTA team, playing a key role on her 3.0  team that advanced to USTA Sectionals in Virginia Beach.

Dan and Felicia got married in October 1988, with many of their tennis friends from the Aspen Hill Club in attendance. Over the years, their tennis took a back seat. They had two children, Sarah and Joshua, and the tennis games of the kids soon surpassed that of mom and dad. Sarah and Joshua did attend junior tennis camp at Aspen Hill, which made Felicia jealous of the kids tennis playing. “I told Dan, one day we’ll be back to Aspen Hill.” That day came!

As a 30th wedding anniversary present to each other, the two bought memberships to the Aspen Hill Club. I got them onto the court for their free tennis evaluation, and quickly placed them into Jeff Klein’s adult beginner drills as a refresher for their tennis games. They have been attending these classes once a week, and are now attending Jeff’s Tuesday morning Mindful Tennis class, “We are learning so much about strategy, Jeff really does an excellent job,” explains Felicia. Dan is also participating in Reserve Season Court Time groups and is enjoying meeting new people on the tennis court and chatting with the after tennis, “It’s very social” says Dan.

In addition to tennis, the two have started playing Pickleball. “We walked by and saw the signs, and we wanted to try it! Maria was running the class, and it was so fun. I have never laughed so much!” The two are now regulars on Thursday playing Pickleball in our Pickleball match play—free to members.

Dan and Felicia are always up for trying something new, and this had lead them to meeting new people—even each other! “Life is an adventure. Come out of your comfort zone and you might be surprised. The Club is such a welcoming place,” Felicia explains.

Dan and Felicia, “THANK YOU” two for helping create an environment at The Club where we all have fun. It is excellent to have you back!